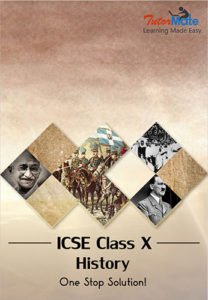 Contains Notes, Video Lectures, Questions & Answers and Past Years Solved Board Papers.
Focus on Application of Knowledge. Virtual Classroom through video lectures with crash course for the Board Exam.
Private learning in a convenient and stress free environment of your home.

1) The Indian National Movement (1857-1917) It was in 1857 that Indians started to revolt against the British rule, post which there was a massive growth in the feeling of nationalism. Later led by the moderates, these middle-class educated professionals demanded reforms and achieved their goals in a peaceful manner. Given below are a list of chapters which will make you even more proud while chanting “Jai Hind”!: a) The First War of Independence (1857) b) Growth of Nationalism c) Programme and Achievements of Early Nationalists d) The Rise of Assertive Nationalism e) Partition of Bengal f) The Muslim League g) Lucknow Pact, Home Rule League, and August Declaration. 2) Mass Phase of the National Movement (1915-1947) Known as the Gandhian Era, this was the final phase of the National Movement. You will learn why M K Gandhi is known as the Father of our Nation as we take you through the below chapters: a) Mahatma Gandhi and The National Movement b) Quit India Movement c) Forward Bloc the INA d) Independence and Partition of India. 3) The Contemporary World- The First World War (1914-1919) A Global War, World War One began in Europe and lasted from 1914 to 1919. Spearheaded by Adolf Hitler and Benito Mussolini, this was one of the greatest wars in the history of mankind! Know more about the Contemporary World as we immerse you into how things took place with the below chapters: a) The First World War b) Rise of Dictatorship c) The Second World War d) The United Nations e) Major Agencies of The United Nations f) Universal Declaration of Human Rights g) Non-aligned Movement SECTION B- CIVICS Given below are the chapters covered: a) The Union Parliament b) The President and Vice-President c) Prime Minister and Council of Ministers d) The Supreme Court e) The High Courts and Subordinate Courts
Contains Notes, Video Lectures, Questions & Answers and Past Years Solved Board Papers.
Focus on Application of Knowledge. Virtual Classroom through video lectures with crash course for the Board Exam.
Private learning in a convenient and stress free environment of your home.
Made by teachers with several years of experience preparing students for the ICSE Board Exam.
Free Demo available at : www.tutormate.in (Click on: View Demo), For any Queries please contact Tutor Mate at 0845497733

Added to wishlistRemoved from wishlist 0
Add to compare
Uncategorized